The Nomadic University for Art, Philosophy and Enterprise in Europe – NUrope – aimed to investigate the dynamics between art, enterprise and social development. Based at Åbo Akademi Business School (Finland), the project manifested in a series of cities such as Åbo/Turku, Kassel, Ljubljana, Istanbul, Zadar, Kyiv and Lviv. I joined the project in 2007, and was appointed coordinator for the two final years, up till 2012. The commission was artistic as well as administrative, and opened for interventions in various settings; among them the European Cultural Parliament and the old city of Zadar.

As the Nomadic University set out in 2006, Italian artist Michelangelo Pistoletto furnished the project with two symbolic artefacts: the Baltic Table and the Mediterranean Table. They were basically two high-gloss polished metal slabs, cut out as maps of the two seas and designed to be carried around. Each NUrope session used to employ either of the tables; serving as a workplace and a gathering point, and also reminding us of the importance of the seas – separating and connecting people.

However, for the Zadar session none of these tables were available. I then suggested the making of an Adriatic Table – to honour signor Pistoletto as well as our local hosts – and subsequently prepared a workshop to carry it out. The local Museum of Glass kindly provided us a workspace, where the NUrope participants could cut a map out of a plywood board and tile it with mirror mosaique and pebbles collected from the sea shore nearby. Two hours later, we could carry a sparkling tabletop through the streets of Zadar’s Old Town to the former church of St Donat, where it fulfilled its function for the rest of this NUrope session. Afterwards, the Adriatic Table was donated to the University of Zadar, where it’s still in use. (The Mediterranean Table now stays with Fondazione Pistoletto in Biella, Italy, while the Baltic Table has found a home at Åbo Akademi Business School.) 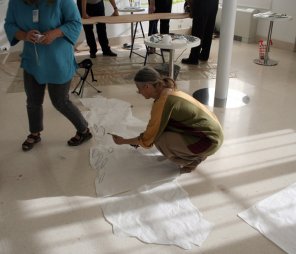 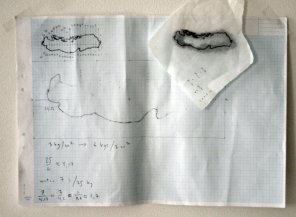 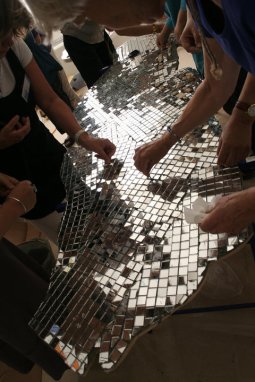 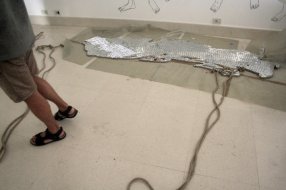 A multilingual performance at the European Cultural Parliament’s session in Gothenburg, December 2009. In the preparatory process I sent a text, conceived in Swedish, to a group of volunteers. By their help, the text was translated into Arabic, English, Finnish, Italian and Russian. At the ECP gathering, the resulting set of renderings was read on stage by six of the delegates. During the reading, I outlined their images on screens of black fabric, following the scheme of Leonardo’s Vitruvian man.

Here I am.
My body, a space.
Its measure.

To everybody, infinity
is the same.
Faced with infinity, thought comes to a standstill.

My thought moves back
from this borderline of stillness,
inwards and downwards;
a vortex.

Down through my body,
and deeper down,
through Earth,
down to its centre

our common centre,
where gravity ceases to be.

I stand upright,
I float between gravity and grace.

Vertically separated,
though connected
in the innermost
and outmost. And

hand on heart, who are
you?