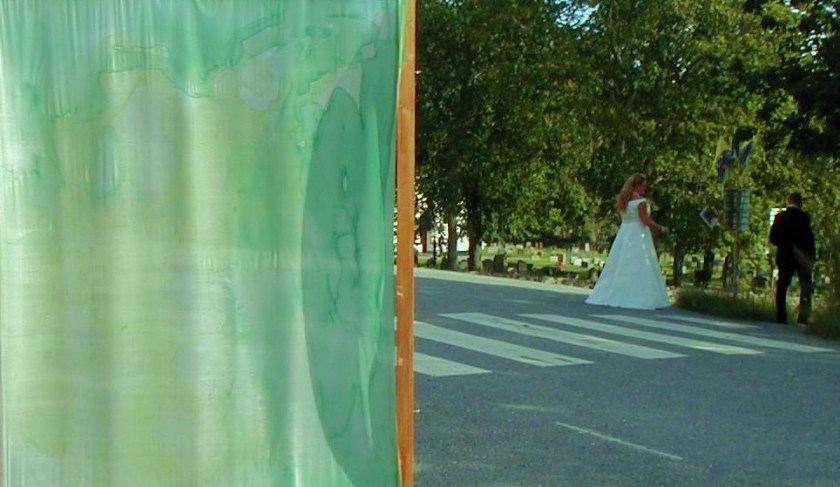 The green piece; silk painting (one of twelve pieces, each one measuring 140 x 200 cms); outdoor installation at Vårdinge Kyrkskola, September 2007

These pieces were painted on silk fabric, which – like glass – allows light to flood through it, creating a coloured space on the shaded side. Unlike glass, though, it can also be viewed from the illuminated side where it has qualities similar to ordinary painting.

The investigation took place in the grounds of Vårdinge Kyrkskola, a former school situated between a lake and a forest, close to a 12th century church. Today, it houses a kindergarten.

Nine of the pieces were arranged in sets of three, embracing an approximately triangular space at the forest fringe, and covering the full range of colours. The remaining three were set up singularly: a white piece, facing the set of nine; a green piece facing the church as well as the entrance to the grounds; and finally a black one at the centre of the playground. The painting was done in situ.

The arrangement can be seen as a scenography, as it implies the participation of the visitors. Walking around will change not only the spectator’s point of view, but also the conditions of light and shadow in which s/he moves.