iron and silk; construction work for the hilltop site

Our colleagues and friends in Greece send us greetings: in Athens, Delphi and Epidauros they experience the remnants, the reminiscences perhaps, of antiquity – while we in Järna enjoy the sweetness of a new spring. Sap is rising and trees are coming into leaf in the garden. The beekeeper is busy working by the hives, and so are the bees – golden dots whizzing back and forth in the sunshine. The return of Persephone and presence of Apollo is easily imagined here. And wasn’t Apollo’s priestess once known as the Delphic bee? Didn’t Apollo learn from the Thriai to become a seer? 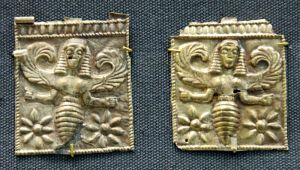 Apollo speaks to his brother: “There are certain holy ones, sisters born… three virgins, gifted with wings: their heads are besprinkled with white /barley/ meal, and they dwell under a ridge of Parnassus. These are teachers of divination apart from me, the art which I practised while yet a boy… From their home they fly now here, now there, feeding on honey-comb and bringing all things to pass… ” (Homeric hymn IV; to Hermes, 4th century BCE?)

And, even before the times of Apollo, there was Gaia; “For they say that in the earliest times the oracular seat belonged to Earth, who appointed as prophetess at it Daphnis, one of the nymphs of the mountain… The Delphians say that the second temple was made by bees from beeswax and feathers, and that it was sent to the Hyperboreans by Apollo.” (Pausanias, Description of Greece, 2nd century CE; Daphnis was one of the ‘virgins, gifted with wings’ or Thriai)

At this hyperborean shore, today we bow to Gaia and to Apollo.

beehives under the hilltop