I’ve learnt a lot from this commission; about the existence of acoustic absorbers, for instance.

One of the many professions involved in the renovation (I lost count of numbers long ago) is the acoustic consultant, who provides advice concerning the interior soundscape. Those guidelines come with a drawback, though: the recommended pre-fab acoustic panels would cover most of the coloured back walls, which were designed to give each classroom its character… Hmm. The commissioner, the site manager, the architect, the school representative and I discuss the matter, but decide to leave the issue unsolved for now.

Unlike the other classrooms, the music room is furnished with a site-built wooden panel, designed to diffuse soundwaves rather than absorb them. It’s made from lathes of different thickness, arranged in a sequence of four: one broad, one thin, two mid-sized; repeat x 14. The visual pattern of the diffuser corresponds to some kind of keyboard, or notation of rhythm perhaps. Of course, the surface had to be painted too – it wasn’t part of my commission, really, but I couldn’t keep my hands away… 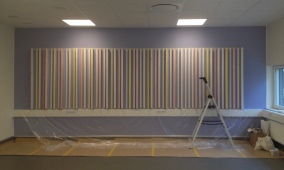 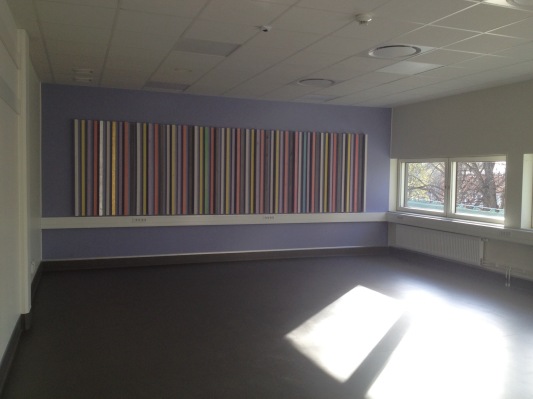 I decided to use the lilac of the back wall (just a shade lighter) for the bottom and the sides of the lathes. Then the outer surfaces could sport a colour sequence… Hey, couldn’t it be associated to tones somehow? Yes – Chinese music traditionally uses a pentatonical scale, where the notes correspond to white, yellow, violet, red and black. Now that’s a pretty unconventional palette; I’ll give it a try. Furthermore, the colour sequence of five, overlapping the form pattern of four, will produce a pleasant cross-rhythm.

Then there was the carpenter, who suggested I paint the whole thing in red, green and yellow instead, as a tribute to reggae music – well, I could at least sneak such a triplet in somewhere. And isn’t there some other combination of colours connected to a certain kind of music..? I ask around, but get no positive answer. Come to think of Conchita Wurst, stunningly beautiful drag queen and inspiring artist… Conchita may or may not be transgender, but she reminds me about a flag that deserves to be better known: the pink, white and blue one.

Salute to Conchita! Salute to Bob Marley and his legacy! And, thinking of legacy – Cecilia Lindqvist, my teacher in Chinese, studied music in Beijing in the early 1960’s. Her teacher then was the renowned qin player Wang Di. Salute also to Wang Di!